I watch the trucks passing by and ask if we need everything their loaded with. Wouldn't we be happier without? If only we could concentrate on the pearl we have.
Posted by Charles at 15:42 No comments: 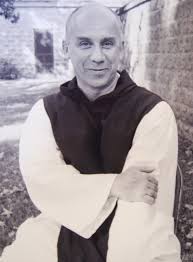 Lauding him as a "representative of the American people "

"Merton was above all a man of prayer, a thinker who challenged the certitudes of his time and opened new horizons for souls and for the Church. He was also a man of dialogue, a promoter of peace between peoples and religions."

... words in an address before Congress.

Charles
Höchenschwand, Baden Württemberg, Germany
Charles Cingolani, is an American citizen who lives in Germany. He is a onetime teacher who is now a recluse. He is the author of The Butler Pennsylvania Poems. His In the Wheat : Songs in Your Presence are poems about early spiritual awakening. He has written Civil War poetry and poems about Auschwitz. He has a volume of Collected Poetry.

His interest in German literature led to his translations: of Eduard Moerike and Rainer Maria Rilke. Also the translation of fairy tales and poetry by Richard von Volkmann-Leander.

In the Wheat:
Songs in Your Presence